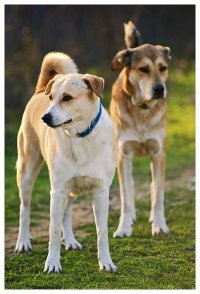 When we first went to Sundance Camp, Cuma (pronounced Juma) was not even one year old. Born in the back streets of Istanbul with a short tail and having spent his short life on the fifth floor of an apartment building, like many of us, he felt like he had landed in paradise. During the ten days we stayed at the camp, he spent his time running around on the beach, laying on the grass, experimenting with the sea and getting to know the other animals who shared the campground. The dog, that once drove me crazy with his hyperactive behavior turned into a mild and balanced animal over the span of just ten days.

When we returned to our apartment in Istanbul, Cuma went to a corner of the living room. Taking the shape of a bagel he laid there with his back turned towards us until the next morning. Back then I thought he was resentful that I brought him back to the city. He wasn’t. Dogs don’t know how to resent. He was just sad. Next time we went to Sundace for vacation, Cuma didn’t come back to Istanbul with me. He stayed there. During the years I traveled across the world , with no land and no home to call my own, my dog planted his roots and became the legendary Cuma of Sundance Camp.

One summer night we were eating in the dining area of the camp. A young guy approached our table. He was pulling a puppy behind him. The leash, a loose string around its neck. He said to my friend who owned the place, “I was walking by the nearby village and the villagers said that the puppy belonged to the camp, so I brought her back”. We all laughed. The young guy, being just a visitor at the camp, naturally, didn’t get the joke. Sending the homeless puppies to Sundance Camp was a well known trick of the villagers.

Şaşkın (pronounced Shashkin), which is Turkish for silly, stayed. She made the camp her home the very next day. A couple of months later she and Cuma fell in love. She turned out to be the perfect mate for him. She remained at his side bearing him three generations of puppies. All of them with short tails. Even after she was neutered she maintained her onlyness for Cuma and sometimes got in life-threatening fights with his potential mistresses. Cuma has been loyal to her as well. He might have had affairs here and there but never appeared in public with any other female dog except Şaşkın!

Cuma and Şaşkın have been an item for more than seven years. They walked the visitors to the beach, they showed them the way to the ancient ruins through the forest path. If one of them felt a danger approaching, the other one would sense it immediately. They would bark and run in that direction together. In winter they slept side by side in front of the wood stove. In the spring they competed for a spot on my yoga mat while I practiced in the early morning.

Yesterday morning they found Şaşkın’s body right outside of the camp. The bullet in her side came from a shotgun which is used by the local villagers for hunting wild pigs. Some say they shot her to protect their goats.

Can the intention behind the bullet change the pain in my chest?

The cruelty that human beings are capable of producing is the source of my pain. Stepping into the camp’s territory with the intention of killing a dog that is not attacking anyone is nothing less than sadistic. How can it be that destruction satisfies human beings so much? What are we lacking inside that leads us to violence? As I think of the man shooting Şaşkın I feel the pain from all the violence waged against the weak and the innocent.

The pain of death is so sudden. It shocks us and catches us unprepared. On the inside and through my yoga practice I am searching for tools to cope with my pain. Ancient Yoga texts mention the workings of the universe as a cycle of creation, preservation and destruction which keeps us all going. There can be no creation without destruction and no destruction without creation. One part of me sees this eternal dance of the universe: Creation, preservation and destruction. The other part of me is scared, angry and helpless. Killing for the sake of feeling powerful is hard to accept. Since yesterday I can’t help my burning heart flowing through my tears and down my cheeks.

A few hours ago I called Sundace to ask how Cuma is doing. They said Cuma took the shape of a bagel and was laying in a corner of the restaurant with his back turned towards us.